Broken promises: Neighbors of Countrywoods Mobile Home Park are asked to leave their homes before the end of March

It wasn’t what they were promised. Tenants of the Countrywoods Mobile Home Park neighborhood have received notices of future evictions.

After months of uncertainty about possible evictions in the Countrywoods Mobile Home Park neighborhood, several tenants have received letters asking them to leave their homes.

The letters, received by several families in late January and early February, ask the tenants to “please make sure you and all occupants have removed themselves and all belongings by March 31st at midnight.”

It’s something that the property management had promised them would not happen when they met with tenants at a community meeting in December 2021. Now families face what they feared from the start: they will have to leave their homes.

“I have never seen our company throw people out like they were nobody,” said Millie Erazo, at the December meeting. Erazo is the property manager for Countrywoods and representative of the company that bought the neighborhood last year.

“The letter says that you don’t have to move,” Erazo said, referring to a different letter that tenants received two months prior to the meeting, in October 2021. It was intended to address the worries tenants were beginning to have.

How it all began 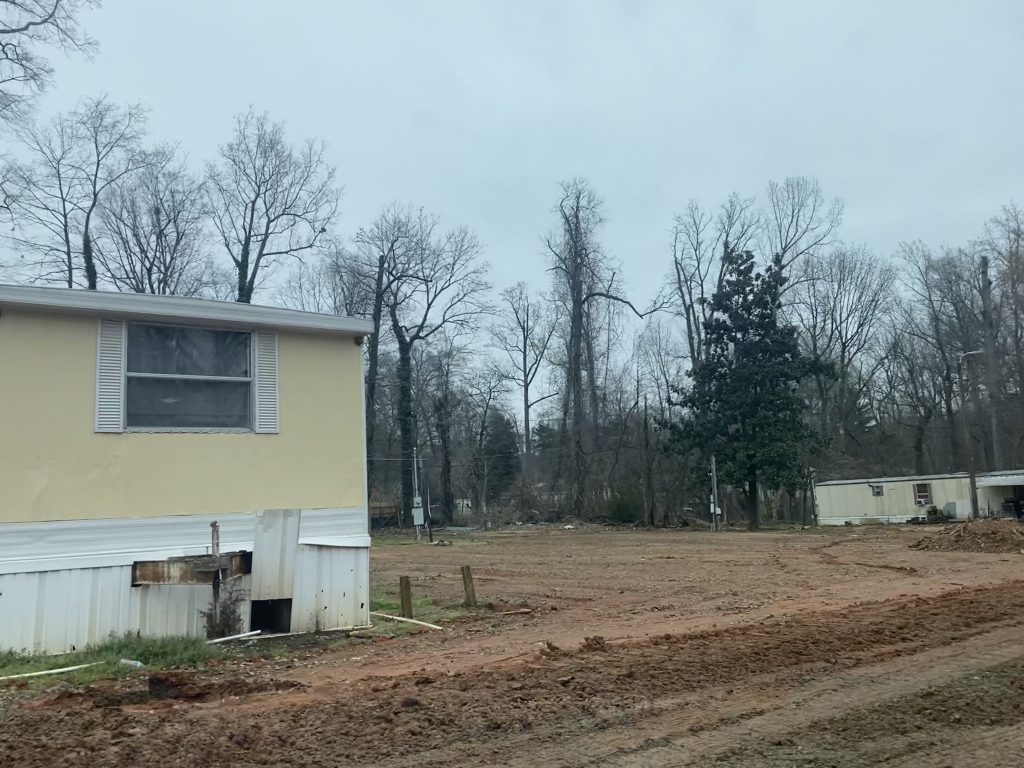 The new owners of Countrywoods Mobile Home Park, located in north Charlotte, have torn down several houses and left the tenants in amid a construction zone. Photo Jasmin Herrera / La Noticia

After the purchase, tenants received a letter notifying them of a rent increase and a switch to month-to-month contracts.

The increase in their rent did not come with increased maintenance, in fact, maintenance had lacked both within the homes and around the property since the previous owners, according to tenants. Neighbors began to fear that their short contracts would provide the new owners the opportunity to evict them.

In the letter that tenants received in October, they were told that the new contracts would not impact them. “CountryWoods Management has decided to offer the month to month lease term to our tenants. This is not something that will affect your tenancy with us.”

The letter tried to assure tenants that management was only knocking down houses because people were moving out, and their intention was to bring new manufactured homes in their place. “We are excited to announce that we will be bringing in new homes for your community, however in order to do this, we will be tearing down homes as people move out.”

Management also tried to calm tenants’ nerves by telling them that they should not be concerned about being kicked out of the property. “It is also not our intention to evict people out of their homes. If tenants are paying their rent and following the community rules, then there is no need to worry”, read the letter.. 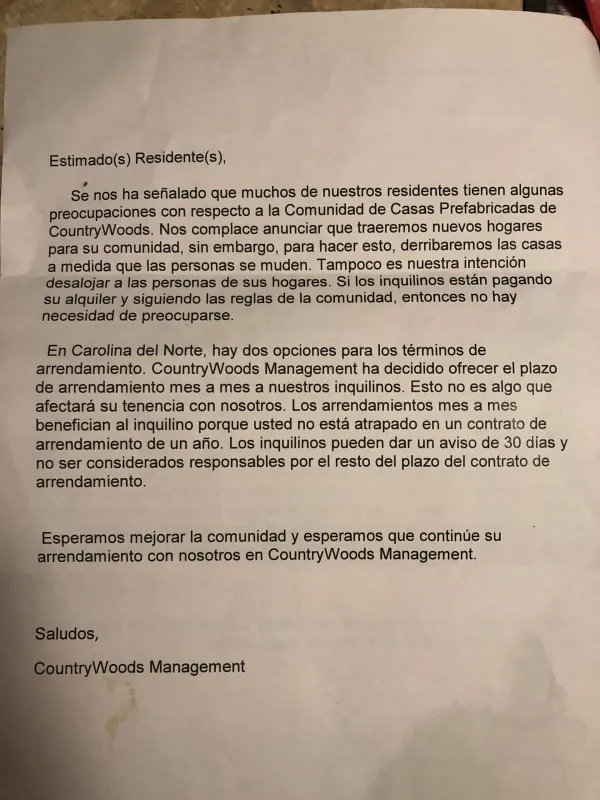 On October 11, 2021, Countrywoods Management sent this letter to tenants. They were told that there was no intention of evicting them. Photo Jasmin Herrera / La Noticia

Aside from the lack of maintenance that lingered from the previous owner, neighbors told La Noticia that they didn’t have any real information on what was going to happen to the land, or if they would be able to continue living there. They didn’t know if they would qualify to buy one of the new homes, how much they would cost, or when they would be installed.

They were only told that the plan was to build on the wooded, undeveloped section of the property first, then they would finish by developing the side that tenants currently live on. As of March 10, 2022, there was no noticeable development on the wooded part of the property — only construction around the existing mobile homes.

A group of neighbors asked for organizing help from Action NC’s Tenant Organizing Resource Center (TORC) and planned December’s meeting to voice their concerns to Erazo and ask for answers from the owners.

La Noticia was present at the community meeting, in which Erazo repeated the contents of the October letter that promised there would not be any evictions. “You don’t have to move at all,” Erazo said.

Erazo, who stated that she has represented KDM Development for 15 years, told them that she couldn’t recall any occasion in which her employers had ever removed tenants from its properties. “I work for a fair company,” she said.

At the meeting, Erazo asked the tenants for 30 days to provide answers to their concerns. Those included:

After the deadline that Erazo originally gave tenants, she answered them on January 10 with a four sentence email that read:

“The property will be under development. Current tenants will stay on a month to month lease. No further information available in reference to new home sales and pricing. Also, homes have been fixed according to service calls”. 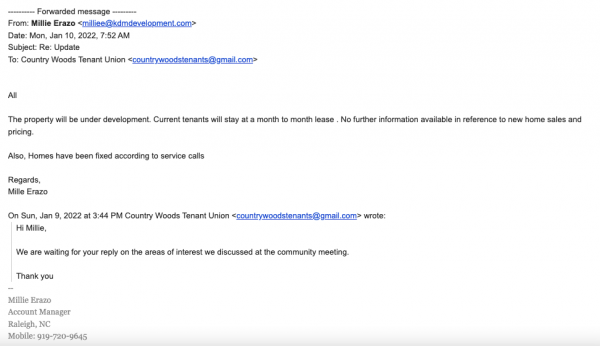 Millie Erazo, property manager for the Countrywoods neighborhood, sent this email on Monday, January 10, 2022 in response to the December meeting and the tenants’ concerns. Photo Jasmin Herrera / La Noticia

At the end of January and in the weeks following, several families received letters asking them to leave the property before the end of March or “further action will be taken.”

The new letter told them that Countrywoods Community, LLC had decided not to renew their now-shorter leases. In the October letter, management had told them that their reduced leases were actually a positive, and not to be worried, as they “benefit the tenant, because you are not trapped in a one-year lease.”

Tenants were not even given the option of being “trapped” in a one-year contract, as the company decided not to renew their contracts after the new year.

According to information obtained by La Noticia from the tenant union, no person who received an eviction notice had stopped paying rent, nor had they been warned of having broken one of the rules of the community. Those were the only reasons for which they were told they would have to leave. 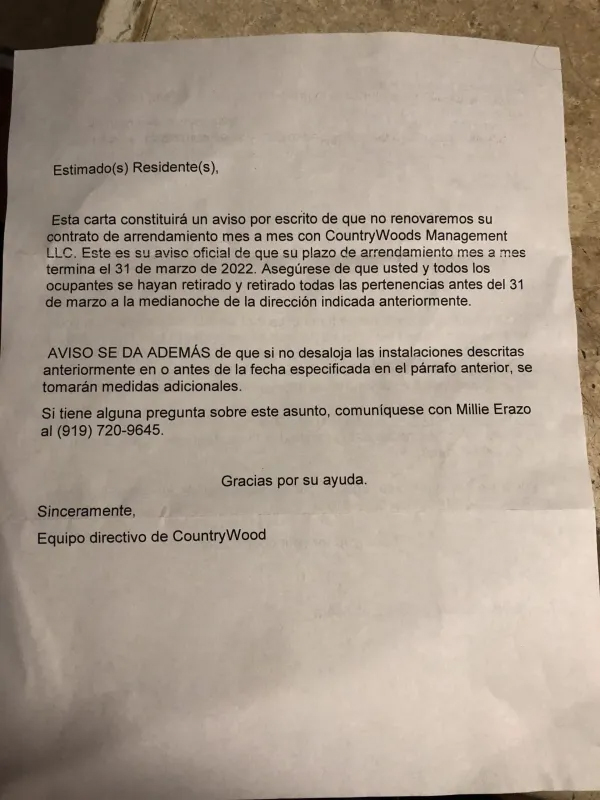 The neighborhood’s management notified the tenants with this letter that they would not be renewing their month-to-month contracts, and that they would have to vacate the property before March 31, 2022. The letter was sent to several families between late January and early February 2022. Photo Jasmin Herrera / La Noticia

what do the owners have to say?

La Noticia tried to contact Millie Erazo after the December meeting and after the eviction notices were sent out. When asked over the phone about Countrywoods, she replied, “I’m not going to answer that right now.”

After other attempts at communication, Erazo asked us to email her and set up an appointment to talk about the plans for the neighborhood. Our emails have gone unanswered.

La Noticia also spoke with Kenneth Burnham, owner of KDM Development, who bought Countrywoods. He said he was “not familiar” with the statement Erazo made in December, where she reiterated that tenants would not have to move.

He also said that he had no knowledge about the conditions and lack of maintenance of the houses of the tenants who still live on the property. “No, I don’t know about that.”

“Millie’s in charge of that. So I don’t really have any input on that. I’m just trying to get the plans approved for the new park,” said Burnham.

In March, the tenants called Burnham to ask questions. The housing organizer working with the tenants told us that during the call, Burnham said that Erazo was the owner of the property, not him, and hung up.

In other attempts to contact ownership, La Noticia called the number lsted for the Countrywoods community, and found that the line had been disconnected.

La Noticia will provide updates on this story as developments arise.