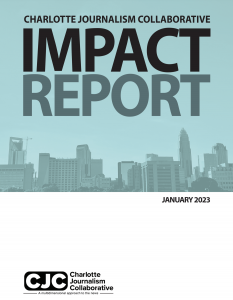 We choose courage over comfort.

We act in service for our community.

We do this through rigorous and collaborative solutions journalism. As we grow as news professionals and as a collaborative focused on increasing opportunity for engagement and trusted information in the local news ecosystem — our goal is to impact the community we serve while revitalizing a sustainable and trust news community that is supportive and vital to the growing city of Charlotte.

The Charlotte Journalism Collaborative is dedicated to provide a platform and structured community journalism partnership that supports the future of Charlotte in its work, serves as a trusted source of information and news and addresses the problems that are the most important to our city’s residents.

Members of the collaborative include Carolina Public Press, The Charlotte Observer, La Noticia, QCity Metro, QNotes, WCNC-TV, and WFAE 90.7FM, as well as the James L. Knight School of Communication at Queens University of Charlotte and the Charlotte Mecklenburg Library.

Formation of the group was led by Michael Davis, South Region Manager for the Solutions Journalism Network, based in the Charlotte area. Primary representatives of the collaborative are:

Charlotte Mecklenburg Library, which works closely with the CJC, hosting charlottejournalism.org and providing meeting and event space throughout the city.

The Charlotte Observer, the leading daily newspaper and news website in the Charlotte region

Knight School of Communication at Queens University, develops students into creative communicators who become engaged citizens and leaders in the communities they serve

Qnotes, is the LGBTQ arts, entertainment and news publication based in Charlotte.

WCNC-Charlotte, an NBC affiliate owned by TEGNA Inc., and one of the major television stations in the Charlotte region

WFAE 90.7 FM, the NPR news station in the Charlotte region