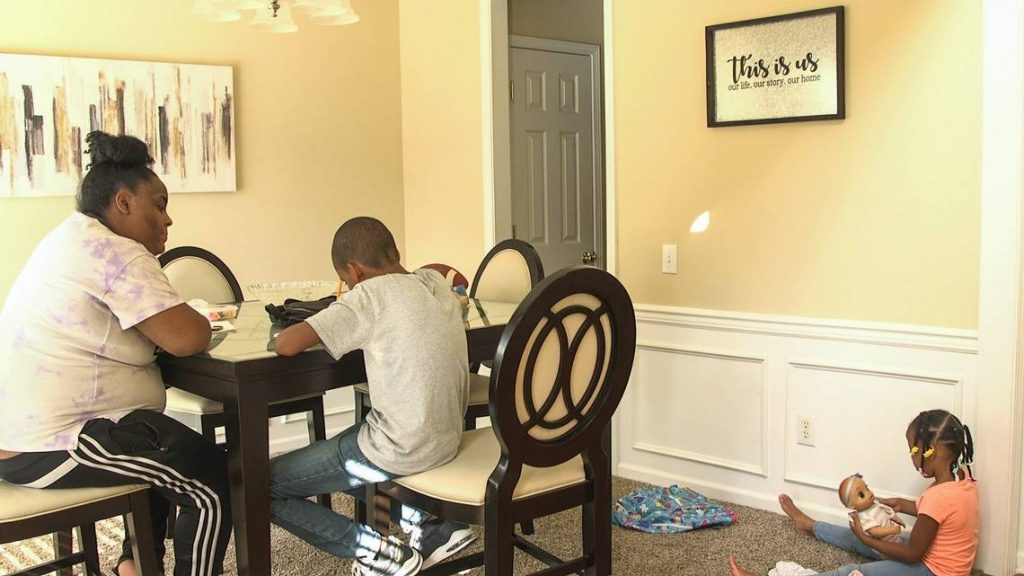 Shaquana Shaw knew immediately when she found it: the spacious house on a tree-lined street with a fenced-in backyard and nearby good schools was exactly what she wanted.

Shaw and her two young children were among the first families to use a new enhanced voucher program through the Charlotte Housing Authority to move to “opportunity” areas with higher performing schools, lower crime rates, and access to transportation and amenities.

“The focus has to be on creating more affordable housing within the city,” Meachem said. “But where (the housing units) are is as critical as how many.”

Program parameters were designed in consultation with the findings of the landmark 2014 Harvard-UC Berkeley economic mobility study that put Charlotte dead last among the nation’s 50 largest cities. The study found children who move from low opportunity to high opportunity areas have higher educational attainment and lifetime income, particularly if they move before age 13.

“The goal is to catch kids at an early age because that grounds them (for) where they are going in the future,” Shaw said of the program. “Better jobs, better housing, better schools — all around a better environment for the kids.”

Eight Charlotte families have moved using the increased voucher allotments since late last year, but the housing authority plans to place 100 families. That is a small percentage of the approximately 5,000 total vouchers the Charlotte Housing Authority administers through the Housing Choice program, often known as Section 8. About 6,000 applicants are on a waiting list for vouchers, Meachem said.

How does it work?
CHA officials have identified such areas in Charlotte where participants can use enhanced vouchers — neighborhoods where the study found children fared better than expected for economic mobility.

To be eligible, families must have at least one child 8 years or younger. Adults must work at least 20 hours per week, as required for all voucher recipients in Charlotte. Case managers work with tenants through programs to boost credit and savings, teach budgeting and other financial topics.

Voucher amounts in Charlotte have not kept pace with area rents, Meachem said, meaning recipients are increasingly forced to rent in high poverty, low opportunity areas. A regular voucher payment for a three-bedroom home is just under $1,400 per month, while an enhanced voucher is closer to $1,950.

“Now it opens up the market a lot more for our families that they can find housing in areas they want to live in, in areas of opportunity,” he said.

Increasing these voucher amounts without an increased amount of overall federal funding may mean fewer people get vouchers, a trade-off Meachem said they don’t take lightly.

“Some people say, ‘Just lease up and house as many people as you can,’ which is important too, because housing is the foundation and it’s important to get someone in a stable environment,” he said.

“And then other people will say: If we put people in the same places we’ve always put them … They can’t move into a high opportunity area because they can’t afford it, then we’re keeping this cycle of poverty that’s going on from generation to generation.”

The housing authority offers various incentives to landlords who accept renters using the enhanced vouchers, including up to $1,000 to repair damage beyond normal wear and tear and a sign-on bonus, as well as outreach and education to encourage landlords to accept vouchers.

Landlords in North Carolina are not required to accept vouchers, which leaves some Charlotte renters struggling to find a unit to lease even if they get a coveted voucher.

Similar enhanced voucher programs are already operating in other U.S. cities. In Baltimore, the Housing Mobility Program has moved more than 4,000 families into “high opportunity neighborhoods” since 2005.

In the census tract the family left, children born to low-income families on average grow up to earn $18,000 in household income, among the lowest in Charlotte.

It’s meant some trade-offs: The commute to Shaw’s call center job is 45 minutes compared with 10 minutes from their previous apartment, but she said it’s worth it.

“I want them to grow up and be productive kids, go to college. I just want more for them,” Shaw said.

She likes that her kids’ new school has more sports and after-school programs, and that the neighborhood has nearby parks.

“At the apartment, I didn’t want them to go out and play. It wasn’t a desirable neighborhood,” she said. “It’s just little things like that. Now you can go outside and play and you don’t have to worry about something bad happening. You can let down your guard a little bit.”

Shaw thinks it’s too soon for her kids to appreciate her reasons for the move.

“They’ve made friends really, really quick,” she said. “I think that’s all kids really care about at this age, making friends in school.”

Success of the opportunity voucher program, Meachem said, will be measured on a generational timeline.

“The full goal of economic mobility will be, if those children at the end of the day, because they moved into those communities, now are in a higher income bracket than their parents were in,” he said.

This work was made possible in part by grant funding from Report for America/GroundTruth Project and the Foundation For The Carolinas.