Once a Charlotte hotel, The Rise welcomes its first tenants into affordable apartments

A former Charlotte hotel has been converted into an affordable apartment complex and a phased move-in for 88 individuals is underway, the nonprofit Roof Above said Wednesday.

SECU The Rise on Clanton is a former 88-room Quality Inn on Clanton Road near Interstate 77, southwest of uptown. It’s the city’s first “adaptive reuse,” permanent supportive housing, an approach that renovates unused buildings for new functions, Roof Above said in a news release.

Since July 25, 12 tenants have moved in The Rise on Clanton’s 88 tenants will include 10 who were displaced from the North End Encampment in February 2021, known as “Tent City.”

Since July 25, 12 tenants have moved in The Rise on Clanton’s 88 tenants will include 10 who were displaced from the North End Encampment in February 2021, known as “Tent City.”

“The pandemic revealed an innovative opportunity to purchase and convert an underutilized hotel into affordable housing, making adaptive reuse a tool to serve some of our community’s most vulnerable residents,” Roof Above said in its news release. 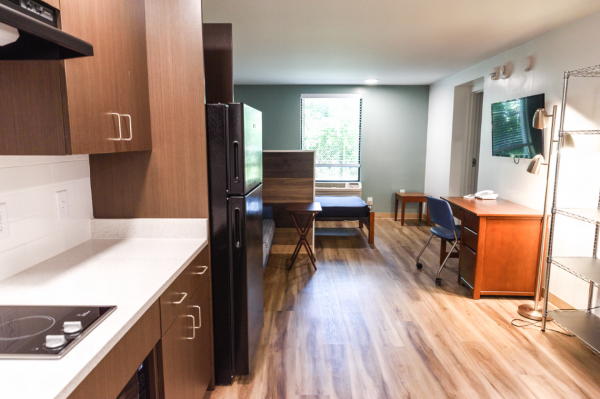 Tenants of SECU The Rise on Clanton will need to spend 30% of their income on rent, in addition to utility costs, according to Roof Above. The nonprofit turned an 88-room hotel into apartments with kitchens and other amenities. Courtesy Roof Above

Work to renovate the former hotel rooms into furnished studio apartments with kitchens started in May 2021. The complex also will provide case managers, a full-time nurse, a “learning lab,” and community spaces.

Typically, tenants in Roof Above’s permanent supportive housing will spend 30% of their income on rent, in addition to utility costs, according to the nonprofit.

The Charlotte-Mecklenburg Coordinated Entry process will select the most vulnerable individuals currently living in shelters for an apartment at The Rise.

All tenants will have been homeless for at least a year and have a disabling condition, Roof Above CEO Liz Clasen-Kelly told The Charlotte Observer.

“You’re finding people that … this is the first apartment they’ve had in years,” Randal Hitt, vice president of community engagement at Roof Above, said.

A PLACE TO CALL HOME

James moved into The Rise on Clanton on Monday. He suffered a stroke in 2003 that left him with permanent physical disabilities — and without a home. His landlord evicted him for missing rent payments while hospitalized, James said. When a friend informed him that the landlord had emptied his apartment, he felt too sick to care about the eviction, James said.

He previously lived in a shelter on Statesville Avenue, which he said felt like “a dormitory.” He rarely had personal space to get the rest he needed.

Now, he enjoys keeping to himself in the comfort of his own room and double-sized bed.

“It’s very, very comforting,” he said. “For someone like me, I need rest.” 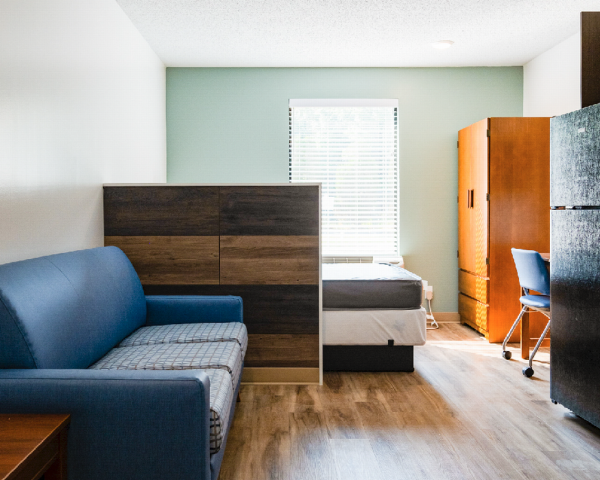 The interior of one of the 88 apartments at SECU The Rise on Clanton in Charlotte, NC. The Rise once was a Quality Inn hotel. Courtesy Roof Above

A TOOL TO SOLVE HOMELESSNESS

Roof Above purchased the hotel in December 2020 and worked with the Salvation Army to use the space as an emergency shelter for women and children.

Each week, Roof Above will move in six to eight tenants “to ensure they are fully supported in their transition,” the nonprofit said in a news release, and no more than two tenants per day, Clasen-Kelly said.

As tenants fill the complex, Clasen-Kelly said she hopes that other organizations will follow Roof Above’s lead in reducing homelessness.

“I think we’ve created something that’s replicable, and so we’d love to continue to see adaptive reuse as a tool for solving homelessness,” Clasen-Kelly said.