People with a criminal record have problems finding housing

The struggle to create accessible, low-cost housing continues in Charlotte. There is a high deficit of low-cost housing directly impacting low-income individuals. The barriers are compounded if the person has a criminal record. The impact causes high rates of indigence and poverty, reducing the ability to adapt to the community and ensure employment. On March 19, a community forum was held to raise awareness of the severity of this issue in the Church Warehouse 242.

In North Carolina, there is an average of 1,800 people leaving the penitentiary system every month. The sentences vary in severity, a minimum percentage is attributed to violent crimes. The majority of people are sentenced without trial, close to 94 at the state level and 97 federal according to the book Plea Bargaining’s Triumph: A History of Plea Bargaining in America by George Fisher, 2000. In multiple cases sentences are unjust. In North Carolina, drug related minimum sentencing laws required judges to give a minimum of 25 months in prison depending only on the type of drug and weight, and not the severity of the crime. This adds years of sentences to minor offense. This increased dramatically the incarcerated population, doubling the number of inmates in NC state prison from 1980 to 2018 reported by FAMM.org. 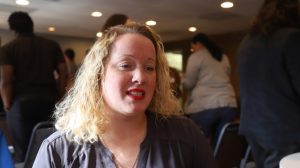 “Change is possible, we deserve to invest in our rehabilitation. It’s a second chance, “said Amanda Martin of the Promise Resource Network

Among the guest at the forum, Changed Choices y Housing CLT, agencies that offer community resources and financial aid. Kenn Shrader member of Reentry Housing Alliance, commented, this is not just about finding affordable housing, it’s about the lack of equity for access. If a person is looking for a house and made a mistake in his past, that mistake continues to harm his future. The report published by Prison Policy Initiative, it establishes that people with crimes in their past are 10 times more likely to be destitute. The National Home of Housing Coalition attributes the causes of indigence in the population with a criminal record includes discrimination, disqualification in the application as a tenant, high deposits and extensive request for professional references.

The aftermath of prison

Amanda Martin, an activist of the imprisoned community and worker of Promise Resource Network, tells us how stigma of her criminal history has prevented her from obtaining housing. I searched for places to live, I paid more than 1,000 in applications and no one would approve me. I left prison four years ago, and despite the time, the barriers remain the same.

Her story created awareness of the consequences of imprisonment I came out of prison without family support, without work and without housing, nobody prepared me, I did not even know what a smartphone was. I had to look for a lot of help, letters of recommendation to try to get a job and try to find a place to live. When I was in jail, the isolation and trauma consumed you, the lack of support and information, upon completing my sentence I was only given 45 for the bus ticket, I had no information or guidance She expressed with emotion The change is possible; we deserve for people to invest in our rehabilitation. It is a second chance and we should not pay for the rest of our lives after serving a sentence.

While the Federal Fair Housing Act states a number of protected classes against discrimination, it does not include people with criminal records, leading to discrimination practices when seeking for housing. To counter act this exposure advocates in the room generated solutions, for landlords to eliminate unnecessary additional fees, to explore further each case and not automatically remove applications with criminal history