Beloved Asheville is working to complete the construction of 12 “tiny homes” for low-income families.

Obtaining housing in the Asheville area has become an increasingly challenging task. Various factors such as inflation and rising mortgage interest rates, along with record-high home prices and rents, have exacerbated a worrying shortage of affordable housing. A local organization is offering an alternative.

BeLoved Asheville, a local non-profit, believes that this huge problem can be addressed by offering solutions within the community’s reach, one house at a time– or rather, one tiny home at a time– under what is known as the ‘Equity Building Model.’

What are “Tiny Homes”?

Living in Asheville is not cheap. According to the website Rent.com, in October the average rent for a two-bedroom apartment was $1,827 per month, which represents an increase of 19% over the previous year. In contrast, the median individual salary is $35,000 a year, per data from the 2020 Census.

According to Ponkho Bermejo, a community leader from BeLoved Asheville, the members of the organization saw that an increasing number of people did not have access to decent housing. So, they started to dream up a unique model that would help the community with more affordable rent prices.

We knew that we had the necessary resources, knowledge, and contacts, and we began to dream that we could build houses that were accessible to people who did not have sufficient resources. We had meetings and consulted with people from various parts of the country,” explained Bermejo, who is from Mexico.

The activist says they studied different housing models and came across “tiny homes,” an architectural and social movement that promotes the idea of living in small and simple houses. Advocates say tiny homes offer a way to live sustainably, without losing the comforts of a traditional home.

According to Appendix Q of the 2018 International Residential Code, a “tiny house” (sometimes known as a microhome) is considered a “dwelling that is 400 square feet or less in floor area excluding lofts.”

The only way to get affordable housing is to collaborate with the right people. So, we created a group in 2017, and for a year we searched for information on tiny homes. We educated ourselves on how to build them, and we decided to start building our own houses in the community a year later,” the community leader recounts. 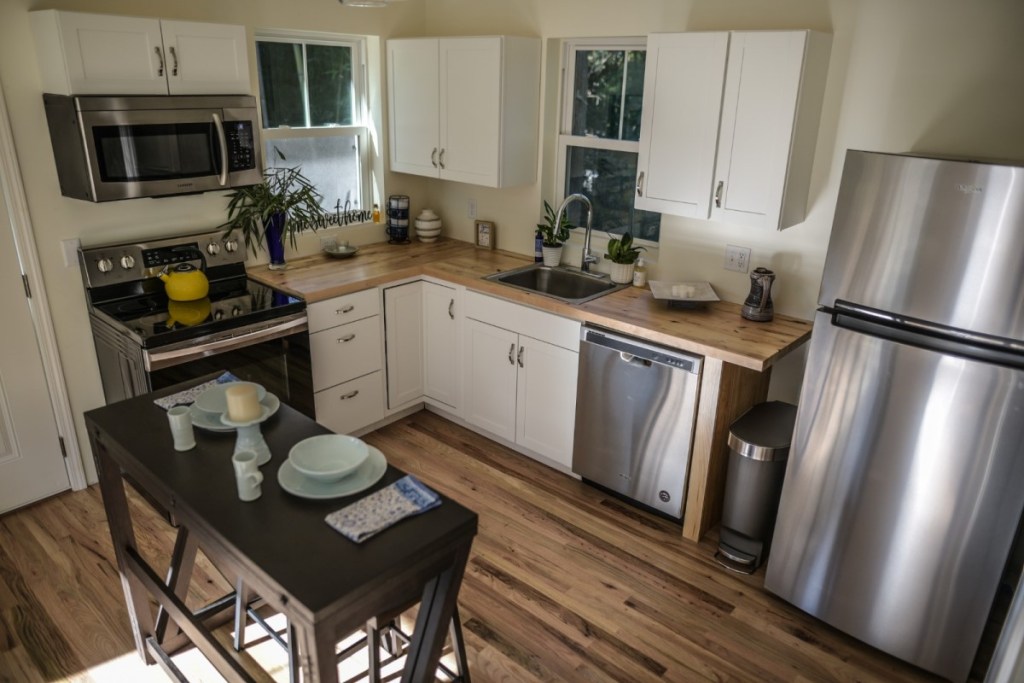 The people from BeLoved Asheville had no experience in home construction, so they approached local architects, civil engineers, and other skilled individuals to begin building these tiny homes. Photo Credit: BeLoved Asheville.

Who makes up Beloved asheville?

BeLoved Asheville was founded in 2008 by the Rev. Amy Cantrell, who was born in Spartanburg, South Carolina. Throughout her life, she was influenced by Dr. Martin Luther King, Jr.’s message of integration. The BeLoved Asheville organization was established with the mission of helping people with financial problems and those dealing with homelessness.

Ponkho Bermejo arrived at Cantrell’s Church. He began participating in their activities, and eventually became President of the BeLoved Asheville Board of Directors.

Other members of the BeLoved Asheville board are Adrienne Sigmon and Cantrell. Currently, around 60 community leaders from Asheville, Candler, Arden, Black Mountain, Swannanoa, Leicester, and Weaverville are involved in the organization.

a project for the whole community

The project of building affordable housing started with an intriguing video, which had enough reach to land in the right hands.

A year after (the start of our conversation), we made a video where we explained the dream we had: we wanted to undertake this idea of creating affordable houses for the people of our community, for people who work 30 or 40 hours a week, without a loan from the bank, or those who don’t have the resources to afford a decent home,” Bermejo explains.

According to Bermejo, the video came into the hands of a church in Asheville called Land of The Sky, which offered to donate an acre of land, where the project could take shape.

“We jumped for joy that day. It was a great opportunity. However, there was a problem with the land– it was overrun with bamboo. We decided to go to this bamboo forest, and we started building the houses there,” he continued.

The people from BeLoved Asheville had no experience in home construction, so they approached local architects, civil engineers, and other skilled individuals to start building the tiny homes. 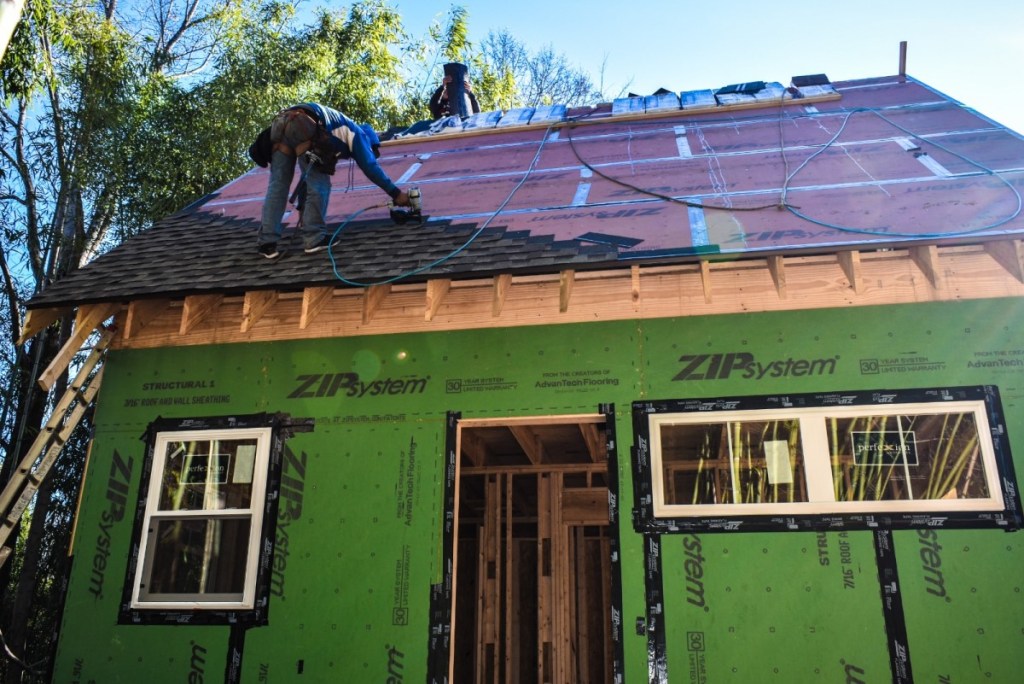 Contributions from the Asheville community have funded more than 70% of the project’s construction costs. Photo Credit: BeLoved Asheville.

Bermejo later approached construction companies in the area that had machinery to dig up the land, and they began to install the structures.

We have a lot of passion for showing that we want a change that benefits our community. That’s how we started with the idea of building houses. We approached specialists, and the best part was that these were people we already knew — people who had helped us distribute food, information, and even tents to those most in need,” he said.

Warren Wilson University also supported the BeLoved Asheville community, as students in a construction class helped with the framing as part of a summer project. Other local organizations donated some of the roofing and painting materials.

People joined after their workday. They arrived at 9:00 p.m. or 10:00 p.m. to help with the construction, from painting to building ramps to digging. In addition, other people gradually donated items for the homes, from refrigerators to toasters,” the activist recalled with a big smile.

Generous contributions from the Asheville community have funded more than 70% of the project’s construction costs.

What is the Equity building model?

The organization adopted an innovative arrangement called the Equity Building Model, which involves creating homes for families to rent at low cost. But the money they pay for rent goes into a type of savings account, with the idea that the money gets returned to the renters at the end of their stay.

The Bermejo explains that the goal of the Equity Building Model is for participating low-income families to have the same chances of progress as others in Asheville.

There are 12 houses, and we plan to finish the project by the end of the year. They are for people who do not have resources, who earn less than $1,300 a week, or who are undocumented. This model is called the Equity Building Model. People will rent these houses for $300 or $400 per month, and this money will go into a savings fund for the families. If these families need their children to go to college or they have an emergency, they can make  use of that money. Or if they decide to leave, the money is returned to them, so they don’t leave with nothing,” said Bermejo.

So far, at least half of the houses have already been built. Rain, lack of resources, and other setbacks have delayed the project’s completion.

We will probably open the registrations to live in the houses at the beginning of 2023. Anyone can apply. The only requirement is that they must be low-income, preferably earning between $30,000 and $40,000 a year,” he added.

The group of people in BeLoved Asheville will choose the 12 families or individuals who get the chance to become part of the new BeLoved Village. According to Bermejo, “they are completely impartial.”

The first house has only one floor (it was built that way for logistical reasons), but the other homes will have two floors and will be available for entire families or individuals.

In addition, the houses are already fully equipped, include all the basic utilities, and have furniture that a family would need in a home.

Applications to participate in the project are not ready yet, but if you would like more information about the BeLoved Village project visit the organization’s website or check out their Facebook page. 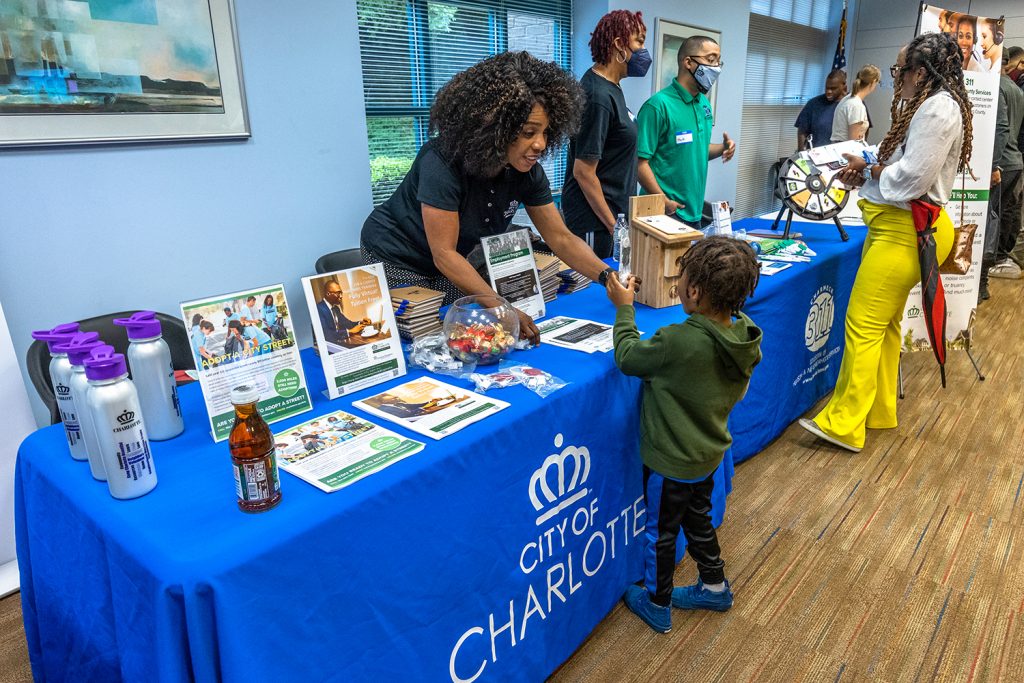