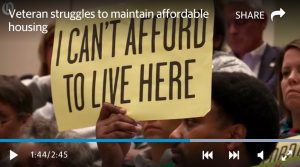 Richard Simmons, 72, of Matthews tells Charlotte City Council that he wants to put a face on the data that show rents are rising in the Charlotte area. BY JEFF SINER

When it comes to affordable housing, the missing ingredient is often land.

To address that, the city of Charlotte is ramping up programs to buy land for affordable housing, sell city-owned parcels to developers who include affordable housing, and donating land to nonprofit groups. It’s part of the city’s new “framework” for building more affordable housing, which has become a major local issue over the past few years, as both rent and for-sale home prices have shot up by an average of more than a third.

For more on this story, see the Charlotte Observer: https://www.charlotteobserver.com/news/politics-government/article218926830.html

Does deserve libraries, too. Woof!

Going back to school after a summer off can be tough. Help your teen build resilience and prepare for what's ahead with an online parental discussion, "Back to School: Preparing Our Teens for Successful Transitions" Tuesday, August 9 at 6 p.m. Learn more: http://bit.ly/3RjybS5

Are you a fan of #Beyoncé's "Break My Soul"? Then, you'll probably enjoy these six inspiring reads from the Library--> http://bit.ly/3BMKL6W. #cmlibrary