How the Charlotte Journalism Collaborative shifted the conversation on the city’s affordable housing problem and continues to seek solutions.

Before the Charlotte Journalism Collaborative launched, there was little conversation about potential solutions to the affordable housing problem in this “New South” city. The housing shortage was already described as a crisis and the city’s growth presented a dire outlook for anyone looking to find a home. A 2014 Harvard study said the Charlotte area had the worst economic mobility among the nation’s 50 metro areas.

The collaborative launched with a series of successful engagement events and a total of 31 stories in its first year. In addition, over 120 affordable housing stories and 80 episodes of WFAE’s “Finding Home” series were shared among the collaborative media partners. Today, nearly 300 stories on the topic have been published by the collaborative’s seven news organizations, including features that have been co-written by reporters from different media outlets.

In one such example, the Charlotte Journalism Collaborative discovered that despite a federal moratorium, evictions continued during the COVID-19 pandemic and most frequently occurred in the county’s most vulnerable areas. The story represents a culmination of six months of research and reporting by the CJC that included the physical examination of nearly 700 eviction cases from October 2020 to March 2021.

The project involved reporters and interns from The Charlotte Observer, WFAE 90.7 FM, WCNC Charlotte, Qnotes and La Noticia. Data reporting staff at Raleigh News & Observer and The Charlotte Observer assisted with additional research and cross-referenced scanned files with state and county civil court data. Researchers from UNC Charlotte Urban Institute compared data to its own demographic county breakdowns, allowing patterns and focal areas to come to light. Additional stories further examined the impact of evictions on the overall housing market along with solutions for tenant protections.

The reporting has had a real impact, too. Great Neighborhoods Committee Chairman Malcom Graham said he was willing to look into successful right to counsel rules after the CJC shared similar programs in Seattle and other cities that work to keep people in their homes.

Later, when a CJC freelancer investigated why tenants facing evictions weren’t showing up for court in Mecklenburg County, the story reached thousands of readers across the region. It was shared across seven media outlets within a couple of days, including a spot on The Charlotte Observer’s Sunday cover. Following publication on the collaborative’s website, the team hosted an online panel discussion with help from the Library as part of a coordinated approach to community engagement and making space for residents to be active participants in the project.

Since its launch, the Charlotte Journalism Collaborative has provided the framework for joint reporting, creative partnerships, increased capacity and broader reach among audiences in need of important news and information. 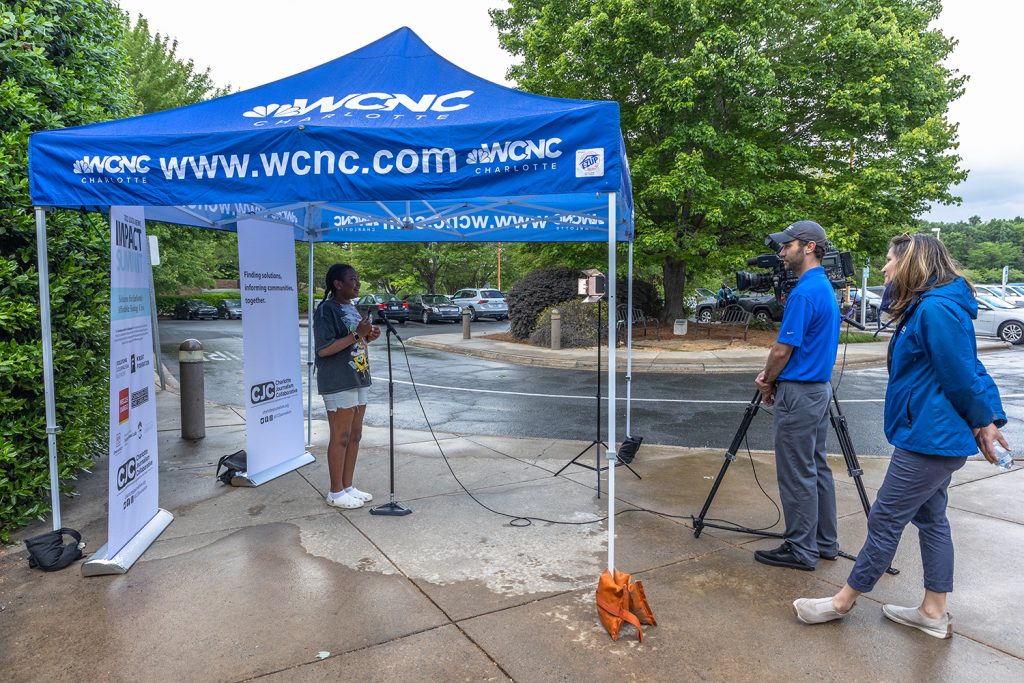 Community members were asked to share what ‘home’ means to them in a video diary produced by WCNC Charlotte at the Charlotte Journalism Collaborative’s Housing Information Fair at University City Regional Library. Thursday, May 12, 2022.

Solving affordable housing requires a collaborative effort. You have to get out into the communities and think about the big stories that need to be told. The CJC was launched with the intention of creating stronger relationships with audiences through the practice of solutions journalism.

The partnership with the Library has aided in providing town halls on housing needs and opportunities, and even addressed challenges faced during the COVID-19 pandemic. In 2022, the CJC strengthened its role as a convener by hosting its inaugural Local News Impact Summit. The full-day event brought together local leaders, housing advocates, corporations and reporters to discuss how affordable housing not only impacts the market but also the core of the community.

Most recently, CJC partners took on a new collaborative challenge. Using four reporters from different media outlets and a handful of researchers, the group sought out ideas from other cities comparable to Charlotte. How can these projects impact development locally?

How can we make Charlotte a city that seeks out innovative solutions to shape our future, while increasing the opportunities to develop our own?

The series, which is scheduled to publish in late October, examines tenant resources in Austin, a neighborhood training program in Philadelphia, community benefit models in Asheville and developer and non-profit partnerships in Nashville.

It is yet another example of how the CJC can deliver stories together that not one of them is able to do alone. Like other projects from the collaborative, the series will include distribution across print, digital, tv and radio, multiplying its reach across Charlotte communities. 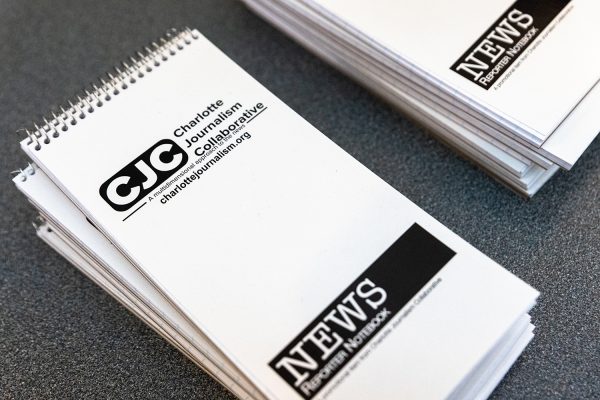 What’s next for the CJC?

The collaboration model has proven to be effective in Charlotte. Hilda Gurdian, La Noticia’s publisher and CEO said after its first year, “It went well above our expectations. It allows us to learn and do things that we were unable to do before for the lack of resources.”

In 2022, the CJC further formalized its partnership with the Knight School of Communication at Queens University of Charlotte in order to launch an ambitious funding plan to sustain the collaborative through 2026. The school serves as its fiscal sponsor, allowing the CJC to apply for both local and national philanthropic support. It also creates opportunities for students to engage with local media and gain industry experience.

Other goals include building on programs that bridge information gaps in Charlotte’s communities and support robust collaborative journalism projects that focus on solutions.

There’s no doubt that the collaborative model has had a profound impact on the way news happens in Charlotte and the way a community responds to issues. It is yet another example of the importance that local news plays in creating a vibrant and thriving city.

The South has often been referred to as a place where people gather around dinner tables or on front porch rocking chairs – telling stories and sharing news from the neighborhood. In many ways, that hasn’t changed. In fact, that communal spirit might just be leading a similar opportunity for collaboration to take hold and shape our future.