Paying homage to some of the great leaders, educators, and librarians of the past. For more about these and other historical figures, check out cmstory.com, website to the Robinson-Spangler Carolina Room at the Main Library. 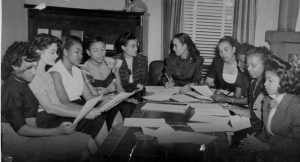 Allegra Westbrooks grew up in Fayetteville, NC where she spent her childhood peeking through the windows of whites-only public libraries. Her mother, a schoolteacher, passed a love of books down to her. She attended Fayetteville State Teachers College and Atlanta University where she received a Bachelor of Science in Library Services. (Borden, 1984)

The Charlotte Mecklenburg Library (known then as the “Public Library of Charlotte and Mecklenburg County”) hired Ms. Westbrooks in 1947 as the head of Negro Library Services at the Brevard Street Library. Only two libraries existed for the black community the Brevard Street Library in the old “Brooklyn” neighborhood, and one in Fairview Homes Public Housing on Oaklawn Avenue.

To attract the black community to these two branches, Ms. Westbrooks launched a campaign to encourage reading in visits to churches. (Bolling, 2005). She also partnered with the Phyllis Wheatley YWCA (only two doors down from her library) and Girl Scouts to form coalitions to increase usage of the black libraries.

Her work in revitalizing the collection and spreading the word in the community bore fruit quickly in increased library usage and community recognition. (Mulford, 1950)

Many community members remember her coming with a bookmobile to inspire them to read. “It is gratifying,” she said, “when you’ll be on the street and see somebody, and they say, ‘I used the book mobile. I want you to meet my four children. I insist that they read.’” She would also pick up books that the black community requested at Main Library once a week. (Perlmutt, 2009; Bolling, 2005)

She was promoted Head of Acquisitions in 1950 at Main Library. Charlotte Mecklenburg Library officially integrated on November 19, 1956, and the next year Allegra Westbrooks was named supervisor of branches. Fifty years later, she recalled her experiences this way:

“You could tell when I went out to the branches, that some white librarians acted like, ‘Here’s that black woman coming in here to tell us what to do.’ I had to be diplomatic to survive.“ (Perlmutt, 2009) 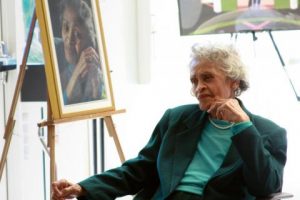 “Her recommendations were good, and I was pleased to have her join our staff, but I didn’t realize the library and the community were getting a jewel. . . . Allegra Westbrooks has been a giant for good in Charlotte and Mecklenburg County.” (Osborne, 1969)

She also served the community through work in the NAACP. Within two and a half years of coming to Charlotte, she had been named to the local Executive Committee. She chaired committees, spoke at meetings, and strategized for desegregation in the 1950s, a time when an employer could have dropped an employee for membership in the NAACP without repercussion. The Library kept her on, however, and promoted her to make her influence more powerful within the organization. (Charlotte Observer, December 10, 1949, February 18, 1950, September 23, 1950, May 28, 1954)

To learn more about Allegra Westbrooks’s influence on Charlotte Mecklenburg Libraries and our community, visit cmstory.org, the website of the Robinson-Spangler Carolina Room of the Main Library. Alternatively, check out this oral interview from March 2007 housed at the J. Murrey Atkins Library Special Collections and University Archives, University of North Carolina at Charlotte.

A prominent educator and civic leader in Charlotte, North Carolina

Mary Jackson McCrorey was born in 1867 in Athens, Georgia. In 1870, the census recorded that her father was an illiterate day laborer who had nonetheless acquired $500 worth of real estate. Her mother and her older siblings could read and write. None of the other African American families in the census pages near the Jacksons had any literate members. Young Mary must have grown up understanding the importance of education and the obligation to use her skills for the benefit of the community. At any rate, her work as an adult reflected those convictions.

She attended Atlanta University and became a teacher after graduating in 1885 (Catalogue, p.10). She served as a school principal first in Athens and then in Augusta, Georgia before marrying Henry L. McCrorey and moving to Charlotte in 1916. Dr. McCrorey was already President of Biddle University (later renamed Johnson C. Smith University) at the time. As a couple they worked together and separately to “uplift the race,” as Booker T. Washington put it. Mary McCrorey involved herself in local, state, and international organizations in addition to teaching and serving as an administrator at Johnson C. Smith (Trustees, pp.2-3).  Students called her “Ma Mac,” a name that reflected affection for her as a mentor, especially for women students. (Gilmore, p.226)

In 1937, Mary McCrorey took a pioneering step for an African American woman in North Carolina: she ran for public office.  (Charlotte News, April 14, 1937) At the urging of the Negro Citizens Council, Mrs. McCrorey entered the race for the Charlotte School Board. The Charlotte News referred to her as “a prominent leader for Negro education,”  but she thought of her mission more broadly, “If elected, I will serve as best I can to help promote the educational interests of all the people of the City of Charlotte.” (Charlotte News, April 15, 1937, p.12) Despite such inclusive sentiments, she finished last in a field of eight candidates, garnering support only in districts with African American voters. Her candidacy, like other aspects of her and her husband’s work, won favorable notice from African American newspapers across the nation. (The Plaindealer, April 23, 1937)

Mary Jackson McCrorey’s long life of service came to an abrupt end on January 13, 1944, when she perished in a fire that consumed the McCrorey residence in the middle of the night. Her death received prominent treatment and she herself was praised warmly by Charlotte’s daily newspapers. At her funeral, the speakers included leaders from the University as well as the Mayor of Charlotte and the president of another college in the city. Her life serves as yet another illustration of African American activism during the long night of Jim Crow.

Learn more about some historical figures from the Charlotte area!