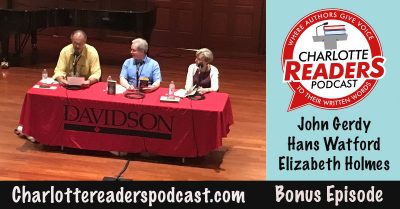 In today’s live Class of 1979 Davidson College reunion episode, we meet authors John Gerdy, Elizabeth Holmes and Hans Watford, Davidson graduates who proved years later that a liberal arts degree really can help you do almost anything, including publish a few books without giving up your day job.

In today’s live Class of 1979 Davidson College reunion episode, we meet authors John Gerdy, Elizabeth Holmes and Hans Watford, Davidson graduates who proved years later that a liberal arts degree really can help you do almost anything, including publish a few books without giving up your day job.

John was a successful college basketball player turned college sports commissioner turned lifelong musician who will read and discuss his latest book, “Ball or Bands,” which explores the educational return on investment of football programs versus investment in music programs.

And speaking of exploring, Elizabeth “Liz” Holmes, whose talents have allowed her to navigate the worlds of prose and poetry, takes us on an adventure in the book she will read and discuss: “Passing Worlds: Tahiti in the Era of Captain Cook.”

And finally, who better to write novels about doctors fighting for their lives in a medical suspense thriller than Hans, my classmate who lives the life of a doctor every day. We’ll find out from Hans whether Dr. Jack Harris will live to make it to book three.

We start with readings from our guest authors. John begins with a part of his book that shows two sides of his personality, SEC sports commissioner by day and a bluesman by night known as Willie Marble.

Liz starts with her poem, “Incidental,” which illustrates what can happen, only incidentally the captain would say, when the people from one world visit themselves on the people of another.

And Hans starts with a scene where Dr. Jack Harris, the lone physician in a decaying and cash-strapped emergency room on a cold Louisiana night, meets a young female assault victim who will lead him on a journey for his and her very survival.

The authors on the show today graduated from Davidson College in 1979 with host Landis Wade, and despite their various majors, they each became published authors.

John Gerdy was a Davidson sociology major and All-American basketball player. He’s the author of five books, among them, Ball or Bands: Football vs. Music as an Educational and Community Investment (2014), Air Ball: American Education’s Failed Experiment with Elite Athletics (2006) and Sports: The All-American Addiction (2002). John has been recognized by the Institute of International Sport as one of America’s Most Influential Sports Educators.

Find out more about John and his writing at: www.johngerdy.com

Elizabeth “Liz” Holmes was a Davidson English major and is now a writer and editor for the president and provost of Cornell University in Ithaca, New York, and the author of three novels and three books of poetry, most recently Passing Worlds: Tahiti in the Era of Captain Cook (LSU Press, 2018). Her previous collections of poetry are The Patience of the Cloud Photographer (1997) and The Playhouse Near Dark (2007), both published by Carnegie Mellon University Press.

Find out more about Liz and her writing at: www.elizabethholmespoet.com

Hans Watford was a Davidson biology major and is now a cardiologist in private practice in Birmingham, Alabama and the author of two medical thrillers His first book, Mortal Strain, won First Place for Outstanding Fiction at the prestigious Santa Barbara Writing Conference, and was nominated for the Edgar Award for Best First Novel by an American Author. The second of his Jack Harris series, Lethal Risk, was nominated for the SEBA Best Fiction Book of the Year and highlighted on FOX News as one of the Best Books to Read on Summer Vacation.

Find out more about Hans and his writing at: www.whWatford.com.