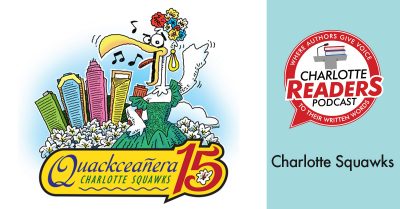 Brian writes the song lyrics and creates the PowerPoint design and Mike directs and performs in a show meant to make fun of just about everything Charlotte and beyond. What is Charlotte Squawks? It’s Saturday Night Live meets Broadway meets our beloved Queen City!

Brian writes the song lyrics and creates the PowerPoint design and Mike directs and performs in a show meant to make fun of just about everything Charlotte and beyond. What is Charlotte Squawks? It’s Saturday Night Live meets Broadway meets our beloved Queen City!

You can join Charlotte Squawks this year from May 30 to June 23rd, as they celebrate their “Quackceañera”. That’s right, FIFTEEN YEARS of FUNNY!! The creative team of Mike Collins and Brian Kahn collaborate with the area’s most talented performers to make fun of pop-culture, sports, life and politics!

We start out with Mike Collins and Brian Kahn reading the director notes for this year’s show and then we dive into conversations with each of them about the why, the how and the what of Charlotte Squawks, and also, we talk about some of the parody songs in this year’s production. At the end of the show, we have a collection of songs from past shows.

Many years ago, Mike Collins, Executive Producer, Director and Performer in Charlotte Squawks, was approached by a group of foreign agents to front a one-weekend-only show that would skewer Charlotte. Viewing them as nothing more than a bunch of maniacal, misguided miscreants, he agreed, thinking he could save them from shaming and degrading the city. But, alas, here we are. Again! 15 editions later. Worse, 10 years ago, Mike solidified his role as unindicted co-conspirator, embracing his collusion with this unpatriotic folly by becoming producer and director. Really, his is a story of one man gone wrong, turning what he learns about the city every day as host of Charlotte Talks on WFAE into grist for the mayhem that is Charlotte Squawks and knowingly using his years of experience as an actor and director of other, legitimate productions, and trashing it for your enjoyment.

When Brian Kahn, Producer, Book, Lyrics and PowerPoint Design, is not writing musical parodies, he is a litigation partner at the law firm of McGuireWoods, LLP, specializing in complex business disputes and financial services litigation. Prior written works include the last 14 Squawks and countless legal briefs filed in courts throughout the nation. Brian is not in the show this year because he has 11-year-old triplet boys and an 8-year-old, and he likes to see them on occasion. Brian would like to thank his wife, Raizel, for allowing him to write this year’s show and promises to stop laughing when the boys tell jokes that don’t make any sense but end with the word “diarrhea.”