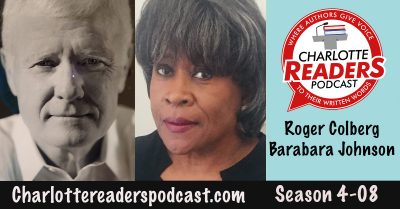 We start with Roger reading his award-winning piece entitled “At the Pond,” where the main characters are the animals. Barbara’s first read is from her memoir in progress, an excerpt from her award-winning piece, “Five Lies,” about a young Barbara whose father won’t buy her the shoes she needs for school. Contest judge Michael Chitwood called it a “rich and wonderfully detailed account of the pain and joy of innocent belief.”

Roger and Barbara read two other pieces on the show, with Roger reading from his award-winning piece, “The Lucky One,” and Barbara reading two other stories from her memoir in progress, entitled, “A Desire to Kill” and “The Shotgun.” Contest judge Robert Inman called “The Lucky One” “a mesmerizing and vividly told story of two men, long-ago friends, meeting again with one intending to help the other, where in a subtle but profound way, the writer probes each man’s demons, leaving the reader to decide which one most needs help.”