Under the Covers with Jan Notzon 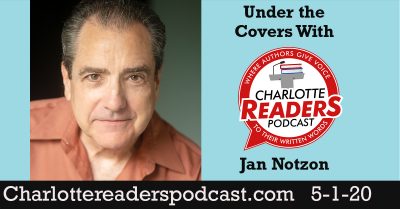 “The Id Paradox” and “Song for the Forsaken”

In this Under the Covers episode, we meet Jan Notzon, author of “The Id Paradox” and “Song for the Forsaken,” among other novels.

In this Under the Covers episode, we meet Jan Notzon, author of “The Id Paradox” and “Song for the Forsaken,” among other novels.

His novel, “The Id Paradox,” is the story of three friends, Jake, Artie and Connors whose bond was forged during an almost fatal canoe trip in which only Artie’s genius for survival kept them alive. It follows their ill-fated attempt to pass Artie’s family across the border, his capture by a drug cartel and Jake and Connors’s harrowing rescue attempt from a Mexican prison and then from the prison of madness. His latest, “Song For The Forsaken,” chronicles the tale of two sisters and the loss of faith that tests the bond between them.

Jan is also a playwright and has worked as an actor, appearing on Another World, Search for Tomorrow, Matlock, The Young Indiana Jones Chronicles and in Beverly Lewis’ The Confession on The Hallmark Channel, a work directed by Michael Landon Jr.